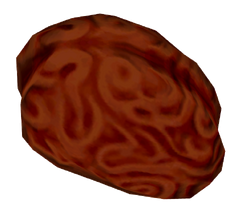 Render Unto Caesar
Nothin' But a Hound Dog

Lupa's Brain is a quest item in Fallout: New Vegas.

It is one of three possible replacement brains for Rex in the quest Nothin' But a Hound Dog. If it is used as a brain for Rex, he will get the Blood of the Legion perk, which increases his DT by 10.

Located in The Fort during the quest Render Unto Caesar. After defeating Lupa in a battle, Antony will allow the Courier to take her brain. Lupa could simply be killed, but this will make the Legion hostile.

Lupa's brain will remain in the Courier's inventory if they put another brain into Rex and/or acquire the Lupa's brain later, when the quest Nothin' But a Hound Dog is completed. (PC

See the Bugs section below for the solution.)

In the course of the quest "Nothin' But a Hound Dog", it is possible to stealthily kill Lupa and loot Lupa's brain from her corpse. If she is successfully killed without the player being noticed, Antony may not "notice" that Lupa has died and will still give you the option to fight her in the arena for her brain. If the player accepts, it is possible to obtain a second Lupa's Brain. Having 2 of the brains in your inventory will cause Dr. Henry to not recognize that you have the brain at all, making it impossible to give Rex Lupa's brain. To solve this, either revert to an earlier save, or enter player.removeitem 0013d851 1 in the console. Make sure that you only have one instance of Lupa's brain. [verified]

Retrieved from "https://fallout.fandom.com/wiki/Lupa%27s_brain?oldid=2992293"
Community content is available under CC-BY-SA unless otherwise noted.