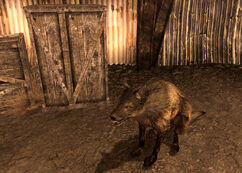 Lupa, close to the surrounding fence of The Fort

“Lupa? Yes, she's the mother of a lot of our best dogs. She's getting old, but she's still a tough old bitch. Aren't you girl? Yeah.”— Antony, master of the hounds.

Lupa is a Legion mongrel that belongs to Antony, and is the mother of many of the Legion's best dogs.[1]

Retrieved from "https://fallout.fandom.com/wiki/Lupa?oldid=3178437"
Community content is available under CC-BY-SA unless otherwise noted.