Completing objectives, purchasing from the store, and for doing quests.

Lunchboxes are a resource in Fallout Shelter.

Lunchboxes contain five cards, one of which is guaranteed to be rare or better. These come in handy when tight on caps, resources, and weapons. Cards include weapons, outfits, dwellers, resources, caps, junk items, Nuka-Cola Quantum, pets or Mister Handies.

There are six basic sources of lunchboxes:

Lunchboxes can be purchased from the shop by pressing the Pip-Boy in the screen corner and navigating to the shop tab. 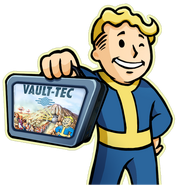 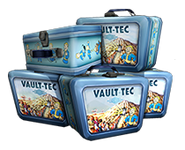 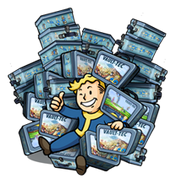 40 purchasable lunchboxes icon
Add a photo to this gallery
Retrieved from "https://fallout.fandom.com/wiki/Lunchbox_(Fallout_Shelter)?oldid=3493656"
Community content is available under CC-BY-SA unless otherwise noted.