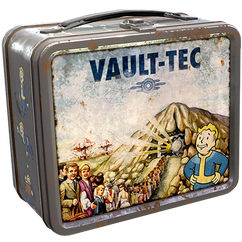 Cannot be traded, dropped or sold.

Lunchboxes are consumables introduced in the Fallout 76 update The Legendary Run.

When used, lunchboxes provide a 'Very Well Rested' bonus, a +25% XP bonus, along with a random "party favor" social effect in a small radius, with effects lasting for 60 minutes and 15 seconds. The 'Very Well Rested' bonus can stack up to four times at any given time, increasing the overall bonus of the individual effect, up to a maximum +100% XP bonus. Receiving additional buffs will refresh the duration.

The potential temporary perks are as follows:

The confetti mess effect for lunchboxes was created by Mark Teare.[1] The effect was first created for Fallout 4 during an internal game jam.[2] Teare wanted to make a blood-free version of the game for his young children, so that they could see what their father had been working on. The effect replaced the blood and gore from killing enemies with confetti, and even included a voice-over of his son laughing, that replaced the gib sound effect. Other developers were somewhat creeped out by the comic violence and the kid laughter.[3] However, the effect was later reworked into its Fallout 76 version, removing the laughter and applying it to the new lunchbox mechanic.

An effect of an individual lunchbox can be lost if using certain magazines such as Live & Love 3 and 8. The effect can be lost if a specific random buff is activated, which will deactivate the magazine. Or, if a magazine is activated after a lunchbox, then that effect and the +25% XP bonus may be lost. The conflicting effects are "Plastic Animals" and "So Much Cake."[verification overdue]

So Much Cake icon