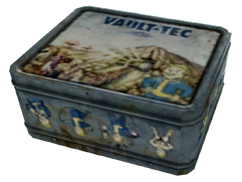 The lunchbox is a miscellaneous item in Fallout 3 and Fallout: New Vegas.

This was a promotional item created by Vault-Tec before the Great War and used in the company's advertisements. With the right schematics, it can be used to make bottlecap mines at workbenches in Fallout 3. It can also be used as Rock-It Launcher ammunition. A lunchbox can be used to make a caravan lunch at campfires or a bottlecap mine at workbenches in Fallout: New Vegas.

Lunchboxes may appear randomly as a toy or kitchen clutter, as well as in the inventories of "miscellaneous" vendors like Crazy Wolfgang, Knick Knack, Karl, and Seagrave Holmes. There are 121 guaranteed places where they may be found. Some locations with guaranteed lunchboxes are:

The Fallout 3 Collector's Edition is packaged in a real-world Vault-Tec lunch box.

Renovated version of the image on the lunchbox
Add a photo to this gallery
Retrieved from "https://fallout.fandom.com/wiki/Lunchbox_(Fallout_3)?oldid=3482048"
Community content is available under CC-BY-SA unless otherwise noted.