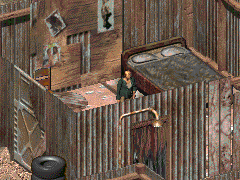 “Well, they said I wasn't human enough for them. I'm sorta radiation resistant -' perfect for here. But they didn't like it. Treated me like dirt.”

John, now known as Lumpy, is an inhabitant of Gecko in 2241.

Born as John, Lumpy lived in Vault City for most of his life. However, due to his unnatural resistance to radiation he was deemed unfit to live in Vault City, so John left for Broken Hills. A caravan brought him to Gecko and he has lived there ever since. He is the only non-ghoul citizen of Gecko.

Retrieved from "https://fallout.fandom.com/wiki/Lumpy_(Gecko)?oldid=3283657"
Community content is available under CC-BY-SA unless otherwise noted.