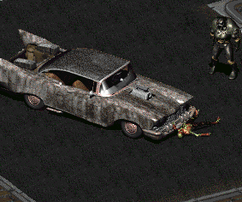 “I'm comin' to meet you Elizabeth!”— Lumpy after getting hit

Lumpy is a passing traveler in Broken Hills in 2241, who appears only when the Chosen One enters the town with the Highwayman.

Seemingly plagued by bad luck (or at least homicidal automobiles), Lumpy is run over by the Chosen One when they arrive at Broken Hills in the Highwayman.[1] This isn't the first time Lumpy has been in an accident involving automotives either - before the Great War, he claims that he personally caused a Nuka-Cola truck to crash, sending bottle caps everywhere...

He then leaves the town indefinitely, no matter if the Chosen One chooses to help him from under the car or not (where he will be gone after a zone change).

If visiting Broken Hills for the first time and in the Highwayman, the Chosen One will unavoidably end up hitting Lumpy with the car, and he will be lodged beneath it. He can be seen under the grill of the car after that, and can then be spoken to while he is beneath the car and be helped, or not.

The Nuka-Cola truck Lumpy refers to is a reference to the Nuka-Cola Truck special encounters in Fallout.

Retrieved from "https://fallout.fandom.com/wiki/Lumpy_(Broken_Hills)?oldid=2342229"
Community content is available under CC-BY-SA unless otherwise noted.