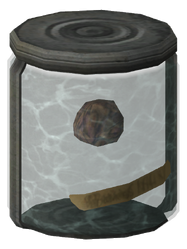 “For some reason, you feel a terrible sense of loss as you look at this familiar lump of gray matter.”— In-game message

Lump of brain is an item in the Fallout 3 add-on Point Lookout.

It is a piece of the Lone Wanderer's own brain preserved in a glass jar, which was removed by Tobar during Walking with Spirits.

The item is in the engine room of the Duchess Gambit, on the table next to Tobar. It can only be obtained after completing the quest Walking with Spirits and asking Nadine in the Ark & Dove cathedral to remove the player character's scar.

Upon examining this item, the game states that "you feel a terrible sense of loss" when looking at this familiar piece of gray matter. This is a direct reference to Fallout 2's mutated toe. However, there is no option to eat the lump of brain in Fallout 3 as there was in Fallout 2 with the mutated toe.

Retrieved from "https://fallout.fandom.com/wiki/Lump_of_brain?oldid=3447664"
Community content is available under CC-BY-SA unless otherwise noted.