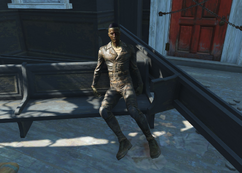 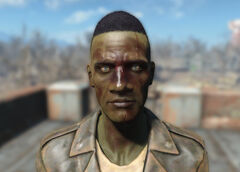 Luke Silverhand is a dead adventurer found at Jamaica Plain in 2287.

A technical specialist, Luke was part of one of the countless salvaging teams that attempted to breach Jamaica Plain's security grid and failed. Part of a group that was assembled by Sal, he and the rest scattered upon encountering the feral ghouls inhabiting the town. He died at some point after barricading himself inside the local church, his body now rotting on a pew in the derelict church of the former town.

Had the operation gone as planned, he had planned to betray the rest of his group by turning the security system of the treasures exhibit on them.

Luke Silverhand appears only in Fallout 4.

Retrieved from "https://fallout.fandom.com/wiki/Luke_Silverhand?oldid=3289535"
Community content is available under CC-BY-SA unless otherwise noted.