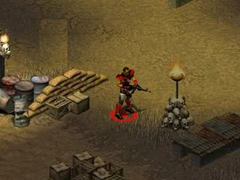 Luke Daniels is one of the four main leaders who controlled the raiders in the region of Chicago in 2197.

Luke Daniels is an African-American man who appears to be a veteran of raids and battles. He believes himself to be a gunslinger and likes to fight a lot. He wears red armor.

He is killed by the Warrior, along with the other three leaders.

His name is a reference to Luke Duke, one of the Duke family members from the early 80-ties television series The Dukes of Hazzard.

Retrieved from "https://fallout.fandom.com/wiki/Luke_Daniels?oldid=3225180"
Community content is available under CC-BY-SA unless otherwise noted.