Criminal
Businessman
Bookie for the races 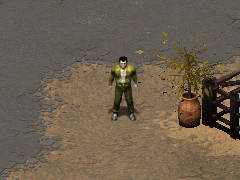 “Hey, soldier! (looks both ways) How ya doin? My name is Don Vinchenzo and I know why you're here. Those thieves, those dirty rat bastards, they snatched your armor and now you're here to get revenge. I respect that.”

Don Luigi Luciano Vinchenzo is a businessman and criminal in the town of Cold Water in 2197.

Don Luigi Vinchenzo is a fat, shady man who owns a lot of different businesses (including radroach runs and prostitutes) in town.

During the Warrior's visit to Cold Water, Don Vinchenzo asks the Warrior for "a favor"... go and assassinate his rival competitor, Ma Baker.

Luigi's radroach race track
Add a photo to this gallery
Retrieved from "https://fallout.fandom.com/wiki/Luigi_Vinchenzo?oldid=3367844"
Community content is available under CC-BY-SA unless otherwise noted.