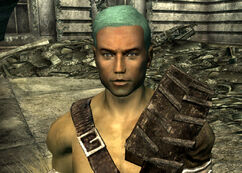 “All right, all right. My mistake. It obviously belongs to you. Now... uhhh... you just watch it cause I won't be so nice next time.”

Lug-Nut is a raider in the Capital Wasteland in 2277.

Still recovering from a recent tussle with Ronald Laren, Lug-Nut is troubled by bouts of depression and mania due to his chem habit. He recently had two pairs of nightwear made by a seamstress to rival Lady Frumperton, sending one to his brother Lag-Bolt. He has hidden one pair of nightwear in the old caretaker's locker, as the deceased Grady will not be needing it any more.[1]

Lug-Nut is mentioned by Sierra Petrovita when asked more about Ronald Laren. She will start talking about how tough Ronald is and will mention Lug-Nut and two other raiders. The two unknown raiders were killed by Ronald, who then punched Lug-Nut in the face.

Lug-Nut appears only in Fallout 3.

Retrieved from "https://fallout.fandom.com/wiki/Lug-Nut?oldid=3263296"
Community content is available under CC-BY-SA unless otherwise noted.