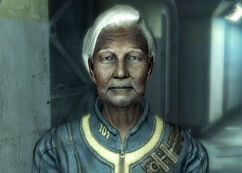 FemaleBOld
NONE (Trouble on the Homefront)

Foolhardy (Growing Up Fast)
Cowardly (Trouble on the Homefront)

Jonas's grandmother lives alone in her apartment where nothing has changed for decades. She's kind and proud of her grandson, and she bakes the most delicious sticky sweetroll.[1]

During the escape from Vault 101, one can find a file on the overseer's computer which states that Anne Palmer, her daughter, was the team leader of a scouting party that left the vault to explore the outside world in February 2241.

Palmer is old enough to have retired from work duty in the vault, and therefore no longer has a Pip-Boy.

She is the mother of Anne Palmer and grandmother of Jonas Palmer.[1]

* Only in Growing Up Fast

Retrieved from "https://fallout.fandom.com/wiki/Lucy_Palmer?oldid=3314538"
Community content is available under CC-BY-SA unless otherwise noted.