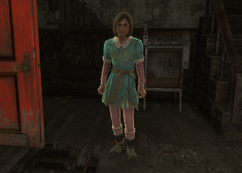 Lucy was the daughter of Morticia and Hannibal Grandchester. According to a legend, she killed her parents and was put into a mental asylum. She escaped on her 18th birthday and was found hanging in the attic of the Grandchester Mystery Mansion nine days later in an apparent suicide. Her ghost haunts her family mansion, which was turned into an attraction for Nuka-World. Her ghost can be seen around the mansion several times, disappearing into dead ends when the Sole Survivor comes close.

Lucy appears only in the Fallout 4 add-on Nuka-World.

Retrieved from "https://fallout.fandom.com/wiki/Lucy_Grandchester?oldid=3234110"
Community content is available under CC-BY-SA unless otherwise noted.