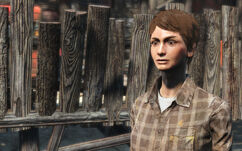 Lucy Abernathy is a young woman living at Abernathy farm in 2287.

Lucy is the daughter of Connie Abernathy and Blake Abernathy, and can be found working with her family at the Abernathy farm. She has a deceased sister, Mary, who was killed by raiders.

She offers to purchase melons from the player character for three caps; passing a Charisma check brings that amount up to five caps.

Lucy Abernathy appears only in Fallout 4.

Retrieved from "https://fallout.fandom.com/wiki/Lucy_Abernathy?oldid=3380666"
Community content is available under CC-BY-SA unless otherwise noted.