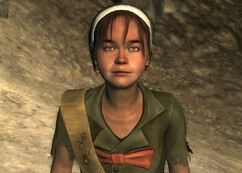 Lucy was born in Little Lamplight in the year 2266 and grew up learning practical medicine from Red, who she considered an older sister. By the time she was seven, Lucy was the preeminent medical authority in Lamplight and her medical knowledge saved Mayor MacCready's life when he was injured in a cave-in.

Since then, she's cared a little more about him than the others, and she thinks of Lamplight as "their family." Since MacCready took control, she's been his constant companion, occasionally tempering his instincts with a measure of caution.[1]

Lucy appears only in Fallout 3.

In Lucy's clinic in the office building, there is a banner reading "The doctor is in!" This is a reference to the character Lucy from the Peanuts comic strip (who pretends to be a psychiatric doctor).

Lucy concept art
Add a photo to this gallery

Retrieved from "https://fallout.fandom.com/wiki/Lucy_(Fallout_3)?oldid=3313596"
Community content is available under CC-BY-SA unless otherwise noted.