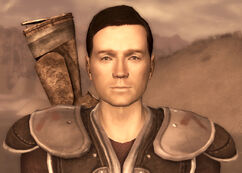 “Ave. Are you ready to travel to the Fort?”

Cursor Lucullus is a ferryman for Caesar's Legion in Cottonwood Cove in 2281.

Little is known of Lucullus. He is a cursor (courier) who transports Caesar's Legion members and allies from Cottonwood Cove to the Fort. When compared to other legionaries, he is noticeably taller.

Lucullus wearing a radiation suit when dropping the barrels during Eye for an Eye
Add a photo to this gallery
Retrieved from "https://fallout.fandom.com/wiki/Lucullus?oldid=3233682"
Community content is available under CC-BY-SA unless otherwise noted.