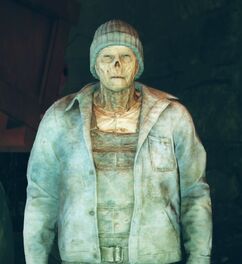 Lou, also known as Lucky Lou,[1] is a member of the Crater Raiders hiding out in Carleton Mine in 2103.

Before the Great War, Lou was an engineer who lived in Pittsburgh. He was born in 2007, making him 70 years old when the bombs dropped. Rumors around the Crater say that an atomic bomb fell straight into his living room, but it was a dud and failed to go off.[1] This was the origin of his nickname "Lucky Lou," a reference to his ability to turn a curse into a blessing, and he went on to defy death in at least a dozen more incidents. As the radiation poured into Pittsburgh, Lou became a ghoul, something that has haunted him ever since. After Lou joined up with the raiders, he became respected by people like Caleb Fisher, even if some of his friends were disgusted by his appearance.[2]

Although many of the Crater raiders would take a bullet for Lou, his worries of turning feral spiraled him into deep depression, believing that the best course of action was to hole up in Carleton Mine and commit suicide. These feelings were planted and amplified by Lev, who despised ghouls and wanted Lou in particular out of the way to sabotage the raiders' heist plans.[3][4] Not wanting to take any chances, Lou would rather take his own life over possibly going feral and attacking his friends. Unable to simply "pull the trigger," Lou constructed a number of death traps that would result in his demise, including a machine-powered shotgun blast,[5] several automated turrets scavenged from the ATLAS Observatory,[6] and even a makeshift building that would collapse in on itself.[7] However, none of these contraptions worked despite multiple trials, living up to Lou's status as someone who would always cheat death. Left with few options, Lou decided to take the last resort of simply detonating explosives. If the collapse of the mine would not kill him, then at least he would be trapped inside and unable to hurt anybody.[8]

Lou's vocabulary is filled with Pittsburghese words such as yinz, n'at, and jagoff.

Lou appears only in Fallout 76, introduced in the Wastelanders update.

Retrieved from "https://fallout.fandom.com/wiki/Lucky_Lou?oldid=3457052"
Community content is available under CC-BY-SA unless otherwise noted.