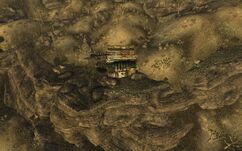 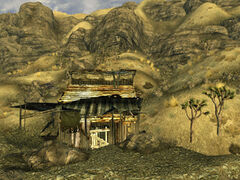 The Lucky Jim mine is a location in the Mojave Wasteland, located north of Ranger station Echo.

Although the entrance to the mine has collapsed, the house is accessible. The small building contains a workbench, beds, shelving units, and various loot. A hollowed-out rock is found outside on the southwest corner of the shack.

A copy of Lying, Congressional Style can be found on the bottom shelf, next to the beds.

When leaving, the Courier may encounter fire geckos coming from their left at the bottom of the cliff. They will attack legionaries nearby, provided the Courier has not already done so.

The Lucky Jim mine appears only in Fallout: New Vegas.

The Lucky Jim mine is located in the same geographical area as the real world Lucky Jim Camp in Clark County, Nevada. 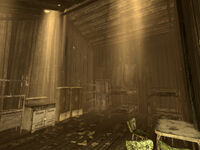 Interior of the mine house

Lying, Congressional Style and the varmint rifle on the shelf of the house.
Add an image to this gallery
Retrieved from "https://fallout.fandom.com/wiki/Lucky_Jim_mine?oldid=3179426"
Community content is available under CC-BY-SA unless otherwise noted.