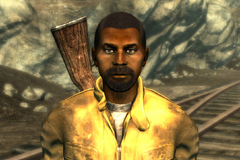 “See, the world's a dangerous and unbalanced place. So I realized, the only way to bring peace was to make sure that everyone could be dangerous!”

Lucky Harith is a caravan merchant in 2277 specializing in the sale of weapons (as he calls them "hot death in a variety of flavors").

Boisterous and friendly, Harith has a toy collection that consists of a wide assortment of weapons. Despite the destructive potential of his gear, he sees his sales as a way to ensure peace in the world by making sure everyone is equally armed.[1]

Lucky Harith appears only in Fallout 3.

Retrieved from "https://fallout.fandom.com/wiki/Lucky_Harith?oldid=3271088"
Community content is available under CC-BY-SA unless otherwise noted.