The Lucky 38 control room is a room deep inside the Lucky 38.

The room consists of a single catwalk with a vast abyss below. The Courier enters from an elevator, which can be taken back to the Lucky 38 penthouse. A terminal and a chamber are at the far end of the catwalk. The chamber contains Mr. House himself. The terminal controls the chamber.

The Lucky 38 control room appears only in Fallout: New Vegas.

If a thrown explosive is thrown at the statis chamber prior to opening it, the chamber will move to the left.[verified] 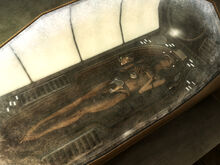 House in the stasis chamber
Add an image to this gallery
Retrieved from "https://fallout.fandom.com/wiki/Lucky_38_control_room?oldid=3053415"
Community content is available under CC-BY-SA unless otherwise noted.