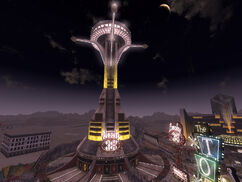 For the Republic, Part 2
Render Unto Caesar
The Moon Comes Over the Tower
The House Always Wins
The House Has Gone Bust!
Wild Card: Change in Management
Wild Card: Finishing Touches
Useless Baubles or Fancy Trinkets? 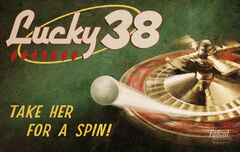 The Lucky 38 is a casino on the New Vegas Strip in 2281. It is occupied solely by Mr. House, the de facto ruler of New Vegas, and his securitrons.

The most prominent element of the New Vegas skyline, the Lucky 38 is a pre-War relic and an enduring monument to Mr. House's vision of Las Vegas: luxury without decadence, refinement without elitism, class without snobbery.

As part of the establishment's pre-War history, a mob shootout took place in the nearby Ultra-Luxe casino on July 13, 2072 and one of the alleged perpetrators holed up in the Lucky 38 with the money stolen from a recent heist. The individual was able to escape the room at the Lucky 38 through a window.[1]

Aside from the varied and colorful past of the establishment, many other developments were occurring in the years leading up to the war. Robert House thoroughly modified the building in preparation for the upcoming apocalypse. Accurate long-range laser cannons linked to massive processing centers were installed on top of the tower to defend against nuclear warheads. A massive underground storage facility for securitrons was built into the foundation. But the greatest marvel was the reason behind Mr. House's withdrawal from society: a preservation chamber built into the core of the penthouse floor, where the potentate sacrificed his mortal shell in return for immortality. Wired into the Lucky 38's mainframe and power core, House was ready to face the coming apocalypse, save for one last item: an OS upgrade for the Lucky 38 contained on the platinum chip.

Due to the unfortunate timing of the Great War, the chip never arrived. Forced to work with an inferior OS, Mr. House nevertheless managed to destroy a majority of the warheads aimed at the Mojave, but eventually suffered a critical system crash and was forced into a coma. The Lucky 38 fell silent and for nearly two centuries, lay dormant amidst the Vegas ruins. Only the odd securitron, controlled by Mr. House after he awoke in 2130, left the premises to survey the wasteland and bring news of the developments.

The tower came to life in 2274, as securitron agents detected NCR scouts at Hoover Dam. An army of securitrons poured out of the Lucky 38, quickly destroying hostile tribals on the Strip and securing the location. Mr. House struck a deal with the three largest tribes, providing them with clothes, tools, and supplies from stockpiles in the Lucky 38 in return for renovating the city and preparing for the arrival of the NCR. The Lucky 38 once again became a symbol of Vegas, as the domain of its mysterious leader. As of 2281, the Lucky 38 remains closed to the public.

Directly inside the front door is the main casino floor, fit with gambling tables and slot machines that cannot be played. The cashier's room is to the left. Above the cashier's room is a VIP lounge, where a terminal used in the quest The Moon Comes Over the Tower can be found.

In the center of the main floor is the elevator. Victor must be spoken to in order to use the elevator so long as House is alive, but otherwise, the player character can operate the elevator independently.

The cocktail lounge is near the top of the Lucky 38, beneath the penthouse. Companions are not allowed inside. The room is filled with empty tables, cash registers with small amounts of pre-War money, unplayable slot machines, and other assorted miscellaneous items. There is an Average locked safe with some decent loot inside, and a Hard locked briefcase containing C-4 plastic explosive, a detonator, and a silenced .22 pistol with some ammunition. The Test Site snow globe can also be found here, tucked behind one of the cash registers.

The penthouse is on the highest level of the Lucky 38. Companions are not allowed inside, similar to the cocktail lounge. Mr. House's control center is located here, down the stairs and to the left of the elevator. Jane is found directly in front of the elevator, and can exchange snowglobes for caps. To the right is a bedroom. The shelves are stocked with numerous pre-War books.

Unlike the cocktail lounge, there is a wall that prevents circling the entire room. This conceals the elevator to the control room. A terminal to open it is to the left of House's control center, which requires either a Science skill of 75, the platinum chip, or the Lucky 38 VIP keycard to operate. Inside are two securitrons. Using the terminal opens a hidden door, causing the securitrons guarding the room to turn hostile. However, upon exiting the room and taking the elevator either downstairs or upstairs, the securitrons will revert to non-hostile status.

The presidential suite is made available immediately after the Courier's first interaction with Mr. House. The suite is fairly spacious and consists of five rooms, including a master bedroom (which contains an owned bed), the guest bedroom (the two beds here are not owned), the kitchen and dining room, the study, and the bathroom (which has clean water). The refrigerator contains some food, and various drinks are present throughout the area. All of the storage within is safe. Through a terminal to the left of the master bedroom, additional storage can be purchased, as well as a workbench.

All companions can be dismissed to the presidential suite in lieu of their original homes. Idle companions will wander around, talk to each other, and occasionally sit in the chairs or sleep. Companions will utilize anything stored in containers or present in the rooms so long as items aren't considered stolen or if the Courier is present in the suite at the time. 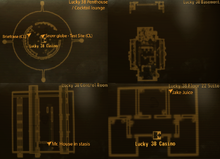 The Lucky 38 appears only in Fallout: New Vegas and is mentioned in the graphic novel All Roads and the Fallout 76 update Wastelanders.[1] 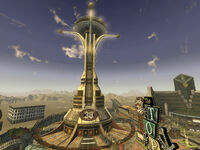 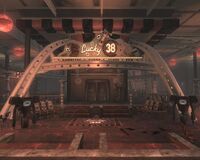 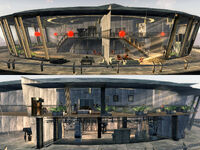 Back of Lucky 38 Caravan cards found in game 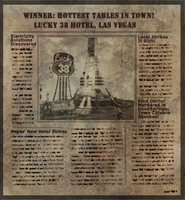 A pre-War postcard featuring the Lucky 38 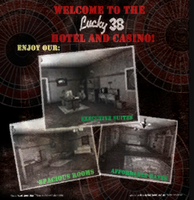 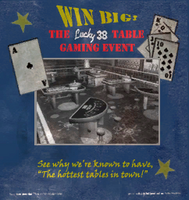 Panel on the casino floor

The Lucky 38 seen from the outside

The Lucky 38 as seen from the Strip at night

The Lucky 38 Casino interior as it appears in the opening scene of Fallout: New Vegas

A securitron outside of the Lucky 38

Tops radio
Add a photo to this gallery