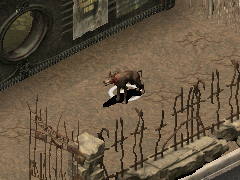 Lucky is a Fallout Tactics multiplayer character and can be recruited for 157 game points.

Man's Best Friend! Great for sneak and recon work. His only combat specialty is HtH (Hound to Hound) but he can disarm traps. He has really bad doggy breath though.

Lucky is the only named dog character in the game and the only playable in the whole Fallout series.

With the Jinxed trait (that affects everyone around) and a name and description suggesting the opposite, it's likely a reference to the pariah dog from Fallout 2.