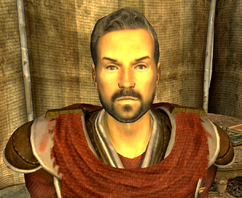 Commander of the Praetorian guard

“The NCR Rangers are the biggest threat. Without them, the NCR is nothing.”

Lucius is one of Caesar's most trusted men and leader of the praetorian guard.

Lucius is the commander of the praetorian guard in Caesar's Legion. He became a member of the contingent in 2268 and became their leader in 2276. In 2277, he took part in the First Battle of Hoover Dam under the command of the legate, Joshua Graham, and therefore is one of the few who know who the Burned Man really is. During the battle, he found himself in Boulder City but he managed to survive the trap of 1st Recon snipers set by the NCR. In 2281, if Benny is captured by Caesar's Legion, it's he who tortures Benny to learn the purpose of the platinum chip.

Despite his age, Lucius has been able to maintain his position in the praetorian guard for thirteen years as no one has challenged him in a battle to the death to take his place at the head of the guard. Caesar suspects this may be more out of his subordinates' respect for Lucius than a result of his strength.[1]

Retrieved from "https://fallout.fandom.com/wiki/Lucius?oldid=3367978"
Community content is available under CC-BY-SA unless otherwise noted.