Lucas Simms' house is the residence of Lucas Simms and his son Harden in Megaton.

The house is protected with an Average lock on the door. The lock can be picked or unlocked with the key, which is in the possession of Lucas Simms. If one completes The Power of the Atom by disarming the bomb, the door will unlock. If one chooses to blow up Megaton, it will remove the possibility of getting the Strength Bobblehead. The inside of the house has the same arrangement of rooms as the player character's Megaton house.

Turn around at the top of the stairs and there will be a green patch. Above it is a "Hatch to Megaton." One can climb out and walk onto the airplane wreck for a view of Megaton as a whole. This hatch is always unlocked and is another potential means of entry to acquire the bobblehead. 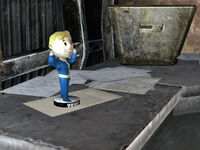