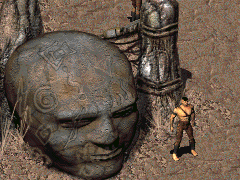 “You have learned well, Chosen One. May the wind be at your back.”

Lucas is a tribesman from Arroyo in 2241.

Lucas is a martial arts master who is always training and looking to aid others who wish to learn his skill. He is extremely capable, perhaps moreso than anyone else in Arroyo.

Lucas/Standing Fist appears only in Fallout 2.

Retrieved from "https://fallout.fandom.com/wiki/Lucas_(Fallout_2)?oldid=3072783"
Community content is available under CC-BY-SA unless otherwise noted.