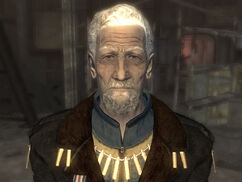 Loyal is the chief mechanic for the Nellis Air Force Base. Keeping the Solar array and other key machines functioning are his primary concerns. He has lived at Nellis since his people left Vault 34. Unlike the other Boomers, Loyal does not appear to be xenophobic. He actually seems to appreciate the Courier's help.

Loyal can be found eating breakfast in the Mess hall & munitions storage from 8:00-10:00am, then in the southern hangar of Nellis or in his house, which is the farthest to the left of the three barracks, on the back side of the two main hangars.

Loyal is named after Joshua Sawyer's grandfather, who worked as a machinist.[1]

Retrieved from "https://fallout.fandom.com/wiki/Loyal?oldid=3264910"
Community content is available under CC-BY-SA unless otherwise noted.