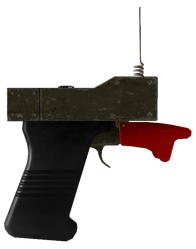 Loyal's detonator is a weapon and quest item in Fallout: New Vegas. Although it is classified as a weapon, it does not inflict any damage.

This detonator is used in the quest Volare!, in conjunction with the deployable ballast to raise the Crashed B-29 out of Lake Mead.

Given to the player character by Loyal at Nellis Air Force Base.

Retrieved from "https://fallout.fandom.com/wiki/Loyal%27s_detonator?oldid=3482004"
Community content is available under CC-BY-SA unless otherwise noted.