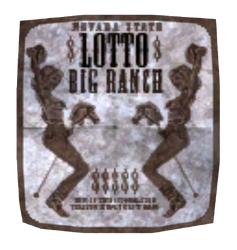 The lottery ticket is a miscellaneous item in Fallout: New Vegas.

Lottery tickets were given to Nipton inhabitants during Caesar's Legion's massacre of the town, used to determine who would die and in what fashion. Tickets can be found scattered throughout Nipton, usually near the bodies of the town's murdered inhabitants. They have no weight and can be sold to vendors.

Outside of the coyote den

Third floor mayor office
Add an image to this gallery

Retrieved from "https://fallout.fandom.com/wiki/Lottery_ticket?oldid=3289042"
Community content is available under CC-BY-SA unless otherwise noted.