Play sound
Metallic_Monks.ogg
“In the fullness of time the bunker became our home, our temple and our salvation from the terrors of the outside world. We began to build and shape our fortress into something glorious, the beauty of which the technologically bereft world had never seen before.”— Sophia's tape.

Lost Hills is the codename of a security bunker located in the southeastern end of the Central Valley in New California, hidden beneath a lonely field station. Claimed by renegade soldiers under Captain Roger Maxson in 2077, it is the headquarters of the Brotherhood of Steel, located in the deserts west of Junktown and the Hub, directly southeast of the Mariposa Military Base.

In November 2077, a few weeks after the Mariposa Rebellion and the exodus from the military base, the refugees from the base arrived at the Lost Hills government security bunker. The people suffered casualties along the way, as while the soldiers enjoyed the protection afforded by their T-51 power armor, their families had naught. Marauders that attacked the caravan on its journey quickly learned to target the unprotected civilians. Although for every lost civilian two raiders fell, many lives were lost, including Roger Maxson's wife but not his teenage son.[Non-canon 1][1][2] Several soldiers broke off during the exodus as well,[3] under Sergeant Allen. Demanding the leadership to allow them to explore the ruins of the West Tek research facility for advanced technologies left behind. Ignoring warnings from Captain Maxson and defying the group's will, Allen's faction separated from the main caravan and ventured southeast to the Glow, taking their power armor with them. They were never heard from again, perishing in the Glow.[4] Around 2151, the Brotherhood sent out knights to seek out Allen's group or its remains. All they found were desolate ruins.[3]

The exodus survivors claimed the bunker as their own. Lost Hills became the headquarters of the newly formed Brotherhood of Steel. The refugees expanded and adapted it to fit their own needs, becoming a bastion of technology in a world that has lost centuries of technological development overnight.[5] Lost Hills became the primary supplier of weapons and ammunition to the region, until the emergence of Gun Runners and other rival manufacturing houses. They traded ordnance for food, water and necessary supplies, not bothering with manufacturing them within the bunker.[6]

Following the destruction of the Unity circa 2162, the Brotherhood aided other human settlements to drive the mutants away with minimal loss of life on both sides of the conflict. The Brotherhood remained out of the power structure for a time, becoming a major research and development house and reintroducing advanced technology into New California at a slow pace. The wise guidance of Rhombus brought the Brotherhood to arguably the zenith of its power.[7] The Brotherhood had good relations with the developing New California Republic, to the point that one of the states of the federation was named after the founder of the Brotherhood: Maxson. However, Lost Hills was never incorporated into the NCR, although Brotherhood patrols did provide protection for the state.[Non-canon 2]

Lost Hills was a pre-War government security bunker. Located almost entirely underground, the only indication of the presence of this installation was a small field station containing the primary access elevator. After the Brotherhood seized the location, two sentries in power armor stood guard at the entrance at all times. One, a man named Cabbot, begins the become an initiate quest.

Guard patrols in power armor routinely patrol the area around the bunker and the surrounding wastes. An encounter with them will usually result in thorough questioning and likely temporary arrest for trespassing on their land.

The first underground level contains the main supply room (filled to the brim with pre-War technology). The stockpile, while full of technology, is rather limited; every brother can withdraw only a single set of armor, while higher tier weapons are only given to those with special clearances from Senior Paladin Talus (or another high-ranking officer).

Opposite the storeroom is the training chamber, where initiates exercise and learn combat skills under the careful guidance of the best fighters of the Brotherhood. The head instructor has his quarters located near the training room. Two other facilities are also present on the level - Head Paladin Rhombus' office and quarters and the guardroom, where surface guards spend their time when off-duty.

The Vault Dweller can participate in several activities on this level, including:

Level 2 houses the living quarters for initiates, their classroom and the facility's medical lab. The youngest members of the organization spend their time here, studying to become either a knight or scribe, under the watchful eyes of higher-ranking members. Their quarters are quite cramped; up to twelve initiates share a room (or even more, if hot bunking is used), but fitted with all the necessary amenities.

The infirmary is well stocked with medical supplies and in 2161 it offered the best medical treatment across the entirety of New California. Apart from healing injuries and removing radiation and addictions for free, the Brotherhood's medical staff can perform human augmentation surgeries:

The Vault Dweller can participate in the following activities:

Level 3 houses some of the Brotherhood's most important facilities; workshops, where technology is maintained and recreated by knights and the libraries, where scribes patiently study old blueprints and knowledge, preserving it for future generations. Their living quarters are also located on this level, design as spartan as the ones of the initiates, although less cramped - only three persons are quartered per room.

In 2161, Head Scribe Vree spends a lot of her time in the libraries, researching vital subjects for the Brotherhood. Even her quarters are located in the library itself.

Activities on this level include:

Housing the command center, mainframe and the elders' quarters, if level 3 is to be considered the heart, level 4 is the brain of the Brotherhood. Unlike other members, the leaders of the Brotherhood each have their own quarters, sparsely furnished, ascetic even. Their conference room is located at the back of the auditorium, used often, despite their apparent inability to agree on anything (except that there's four of them, although even that was questioned).

The mainframe, processing and storage containing the collective knowledge of the Brotherhood, is located out of the way, behind the quarters, accessed through an airlock. It isn't guarded by anyone, unlike the elders' quarters and a meeting room.

On this level, the Vault Dweller can potentially:

The denizens of Lost Hills are exclusively Brotherhood of Steel members, with only merchants and other essential contractors allowed inside for their services. Discipline is strictly maintained, and everyone is expected to fulfill their duties. Members are treated equally, expected to respect other castes and, while highly disciplined, allowed a bit of room for human relations.

Lost Hills appears only in Fallout and is mentioned in Fallout 3, Fallout 76,[8]

Three skills books in these crates 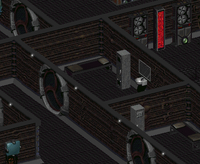 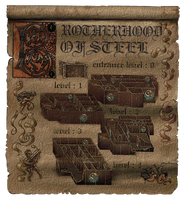 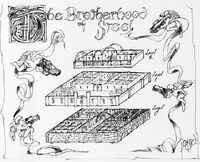