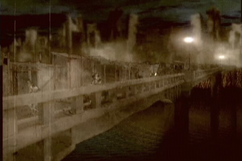 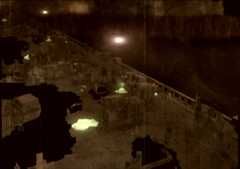 Los is a ghoul city upon the remains of Los Ybanez, located in west Texas. The city possesses a dock area and a heavily damaged bridge. The Secret Vault, built by Vault-Tec to protect high-members of Vault-Tec and used to research the latest technologies and the Forced Evolutionary Virus can be found under the city.

Before the war, Los Ybanez was one of the Texas metropolis, a thriving and sun-soaked city.[1] For this reason, in addition to being a recluse city, the personal Vault of Vault-Tec, named Secret Vault, was founded under the city in the shadow of the U.S. government. After the Great War, the city was heavily bombed and turned into an ashen canyon of crumbling building and bombed-out bridges, and the amount of dust and radioactive basin plunged the city into an endless night, the sun can not break this artificial fog. Most survivors of this apocalypse were turned into ghouls.

After becoming aware of their condition, their first objective was to establish a "paradise" free of humans and other mutants, where they can live in peace,[1] and the city was renamed "Los" (a play on words between the former name of the city and their status of lost in this devastated world). Despite wanting to stay between them, the ghouls of Los were friendly and showed great hospitality towards human strangers, allowing them to trade, and thus to survive. But a local civil war in the Secret Vault caused major damage to the Vault. The people of the Vault were divided and some, blocked because of the damage, or wanting to leave the vault, joined the surface with weapons and the city of Los, conducted by Blake, the old security officer of the Secret Vault. Once on the surface, Blake formed the Church of the Lost, giving themselves a holy mission to protect people against the Secret Vault, as they consider it to hold an evil inside, that should never be released, and he took control of the city.[1]

Those who were friendly lived on the western and eastern part of the city's bridge. Important friendly ghouls here are an old engineer of the Secret Vault - Giese, a merchant Hieronymous and for a moment, an old traveler who comes from The Hub - Harold. Another friendly ghoul and a merchant, Salieri, is found nearby, in the docks. Also, the ghouls of Los manage a Gladiator Pit, an arena where anyone could fight for money and the crowd's entertainment.

Everything changes again in Los when an army of Super Mutants, led by Attis, attacks the city. They quickly make their way to the only remaining entrance to the Vault and take it over, leaving only a few of their soldiers to protect the entrance from raging ghoul fanatics of the Church of the Lost. Sometime later, a group of Brotherhood of Steel Paladins arrive, lead by Rhombus, aiming to battle Attis's army. They were stuck between the Church of the Lost and Super Mutants soldiers, and only Rhombus survived, having been captured by Blake.

Much later, the Initiate, with information from the Vault Dweller, finds the city. He liberates Rhombus, kills Blake and comes to fight his way through the Secret Vault. Inside, he activated the self-destruction sequence and the explosion wiped out city ruins on the other side of the Bridge of Los. As it's seen in Fallout 2, the Initiate helped Harold to recover its members which prevented him from leaving Los, and he managed to leave the city before its destruction and to go to Gecko.

Los appears only in Fallout: Brotherhood of Steel.

According to numerous information and indices in the Fallout: Brotherhood of Steel Official Strategy Guide and in-game, the only possible city for Los is Los Ybanez. 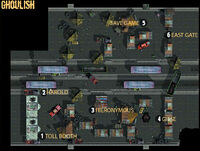 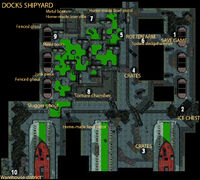 The Dock of Los 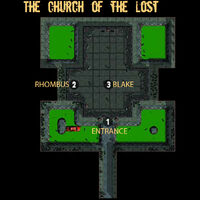 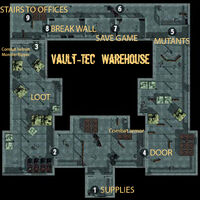 Warehouse basement
Add an image to this gallery

Retrieved from "https://fallout.fandom.com/wiki/Los?oldid=3170236"
Community content is available under CC-BY-SA unless otherwise noted.