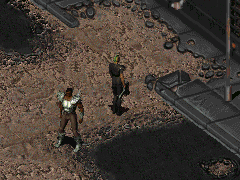 “We only scavenge after dark. And we're very good at what we do.”

Lorraine is a scavenger working for Sammael in Adytum.

A young woman with dark-green hair, Lorraine is one of a half dozen scavengers working for Sammael. She views the Regulators as a strict but acceptable police force, and is unaware of their true intentions. She also sees the Blades as the violent group that the Regulators portray them as.

Lorraine appears only in the first Fallout.

Retrieved from "https://fallout.fandom.com/wiki/Lorraine?oldid=3072065"
Community content is available under CC-BY-SA unless otherwise noted.