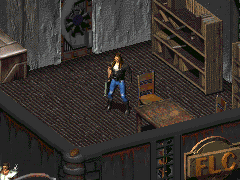 Clean out the Loan Shark

“Only ten percent daily interest, a maximum of ten days to repay. You won't find a more generous lending institution anywhere in the Hub!”

Lorenzo Giovanni is the owner and operator the Friendly Lending Company, or FLC, a moneylending business in the downtown district of the Hub.

Styling himself as "the Munificient" and giving the outward appearance of an honest businessman running a respectable business, Lorenzo is in reality a veritable loan shark. Quite willing to use physical force - via enforcers Guido and Leone - to exact payment from a customer, Lorenzo can grow extremely hostile when clients deviate from an agreement. He also claims that the Giovanni family name has been involved in "respectable business" since even before the Great War.

Lorenzo appears only in Fallout.

Lorenzo's name is derived from two Medici, members of the most prominent banking family of Renaissance Italy. Lorenzo "The Magnificent" was a skilled statesman, diplomat and a patron of the arts and sciences, while the corrupt Giovanni became Pope of the Roman Catholic Church, assuming the papal name Leo X.

Retrieved from "https://fallout.fandom.com/wiki/Lorenzo_Giovanni?oldid=3363769"
Community content is available under CC-BY-SA unless otherwise noted.