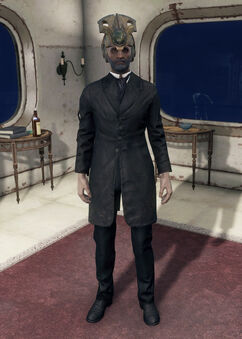 Lorenzo's suit is a unique outfit worn by Lorenzo Cabot in The Secret of Cabot House.

Lorenzo's suit provides a Charisma bonus of 2 while worn but cannot have armor pieces worn over it.

It can be upgraded with ballistic weave.

Lorenzo's suit is worn by Lorenzo at Parsons State Insane Asylum's basement during the The Secret of Cabot House. If one chooses to kill him, it can be looted from his body.

At Pickpocketing skill Rank 4, if one has sided with Lorenzo during The Secret of Cabot House, an infinite supply of the suit can be obtained so long as he himself remains alive. After a few days, another suit will spawn on Lorenzo.

Retrieved from "https://fallout.fandom.com/wiki/Lorenzo%27s_suit?oldid=3183567"
Community content is available under CC-BY-SA unless otherwise noted.