Lorenzo's Crown is an unobtainable apparel item worn by Lorenzo Cabot in Fallout 4.

Lorenzo Cabot discovered this artifact during an archaeological dig in the Rub' al Khali, or Empty Quarter, of Arabia in 1894. His guide protested its removal, believing it to have supernatural properties and afraid of any repercussions for its disturbance. Lorenzo secretly removed the artifact and returned with it to Boston.[1]

When he put it on his head, the artifact fused to his nervous system, granting Lorenzo enhanced strength, resistances, localized telekinesis and immortality at the apparent cost of his sanity.[2] Believing him to be a danger and unable to remove the artifact, his son Jack had Lorenzo and the artifact locked away below Parsons State Insane Asylum.[3]

Lorenzo wears the crown in his cell below Parsons State Insane Asylum, but it is unobtainable without the use of console commands, but even then, it's not even visible to the player in item menus, and can only be spawned with the command player.placeatme 001467F5.

Targeting NPCs and even armor racks in the console will however allow the command equipitem 001467F5 to be used.

The scarab on the crown is the same one used to make Lorenzo's Artifact gun.

Lorenzo's Crown appears only in Fallout 4. 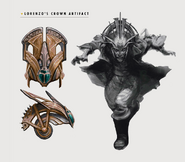 Concept art from Art of Fallout 4