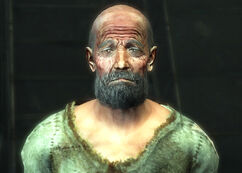 “Haven't run into you before. You probably wouldn't remember me anyway. I'm Mister Lopez.”

Mister Lopez is a suicidal resident of Rivet City in the year 2277.

Mister Lopez, born in 2212, is a quiet, lonely and severely depressed 65-year-old man who has been living in the common room of Rivet City for the past 10 years. His wife and child were killed by raiders, and he came to Rivet City alone and lost. He regularly visits Saint Monica's Church and spends much of his time reading or praying there. Lopez also attends the weekly church service and receives frequent counselling from Father Clifford, the church priest. He consumes his meals in the common room and often sleeps for long periods out of sheer depression. Once a day, he climbs to the top of the bridge tower and contemplates whether to end his life by jumping.[1]

Lopez considers committing suicide due to the fact that no one remembers him or even cares about him (also learned by talking to him on the flight deck that he couldn't save his family), but he doesn't have the courage to do it himself. You can find him on the observation deck at the top of bridge tower every day from 8:00am – 12:00pm, during this time he will simply tell the Lone Wanderer to "Just leave me alone." He will also go to the observation deck every day from 3:00pm – 5:00pm. During this time, you can:

Mister Lopez appears only in Fallout 3.

Lopez at the top of the Bridge Tower

Guard watching Lopez
Add an image to this gallery

Retrieved from "https://fallout.fandom.com/wiki/Lopez?oldid=3131622"
Community content is available under CC-BY-SA unless otherwise noted.