Lonesome Road
“Never again do you or any other courier and caravan need walk that route. Let the Mojave breathe without that asphalt scar raking it.”— Ulysses

It is part of the pre-War Interstate 15 and is used by the New California Republic as a minor military base and a checkpoint for travelers heading to and from the Mojave Wasteland.

The location can only be visited if the Courier decides to launch the nukes at the NCR during the completion of the Fallout: New Vegas add-on Lonesome Road.

Due to the destruction caused by the nuclear warheads launched at the end of The Apocalypse, the area is populated with irradiated heavy troopers and glowing trooper ghouls, along with their former commanding officer, Colonel Royez, who is also in a ghoulified state.

The road from the entrance gate leads northwest and southwest around the crater site. The road to the northwest is populated by ghoulified troopers. To the southwest, a gate leads to a destroyed camp consisting of a small firing range, numerous ruined buildings and vehicles, and several crashed vertibirds.

The road through the camp ends at a destroyed medical aid station where the colonel is initially found. Many bodies of dead ghoulified NCR troopers, along with those turned to ash piles, can be found scattered about the area as a result of the blast. Various lootable containers with larger amounts of ammunition and supplies than is typically found in the Mojave Wasteland are concentrated near the overturned trucks, sandbag emplacements, and medical station.

The Long 15 appears only in the Fallout: New Vegas add-on Lonesome Road.

Sometimes with Rex as a companion when going around the slanted road, he will go outside the map and will be irretrievable. This can also happen to Veronica Santangelo as a companion on PC. This can be fixed by going into the dismissal terminal, either at the Gun Runners or the Lucky 38, and dismissing all companions, and then retrieving them again later. Fast travelling may also work.[verified]

Firetruck standing on a collapsed overpass

Two more high-tech gun cases near an overturned truck, at the end of a blocked-off-road

Long 15 in an endings slide 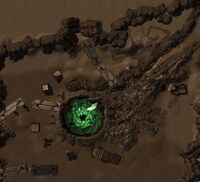