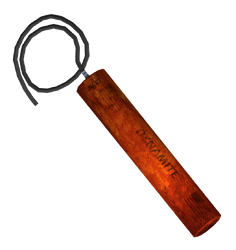 Long-fuse dynamite is just like normal dynamite but, as the name suggests, has a longer fuse, which lasts for 6 seconds. Unlike powder charges, dynamite explodes when you shoot it, either in the hand of an enemy or on the ground when it is dropped. If you'd rather not wait for six seconds, use V.A.T.S. to deliver the throw. Your target tends to wait patiently for the dynamite to explode.