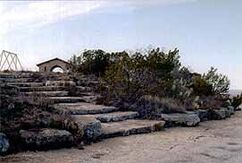 Image used as concept design for Vault 39 in the FO:BOS2 design document

“Then it's off to Lone Star, the jewel of Texas.”— Fallout: Brotherhood of Steel 2 design document

Lone Star is the trading center of Texas[1] that stands on what used to be known as Abilene before the Great War.

Lone Star is a hotspot with local factions and a place of commerce. Although the various groups remain civil for the most part, they are not beyond hiring those ready to carry out some dirty work. Recently, a strange man came to town bearing seeds, seeds that were planted on the east side and have become a farm. This man remains in the town, and is actually a member of the Cypher, but he is incomprehensible to near everyone, so no-one is sure of his business in Lone Star.[2]

Lone Star consists of four medium maps that make up the town itself, and eight medium maps the make up various "basements." Lone Star is also the home of the old Abilene Vault.[2]

Lone Star was going to appear only in the canceled Fallout: Brotherhood of Steel 2.

Retrieved from "https://fallout.fandom.com/wiki/Lone_Star?oldid=3328058"
Community content is available under CC-BY-SA unless otherwise noted.