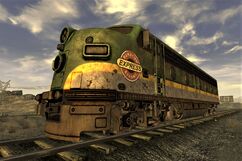 A locomotive is a type of railroad vehicle, examples of which can be found in the Mojave Wasteland.

Railroads were used for transporting freight in the pre-War United States, used by locomotives of several different companies such as Barstow Express. By 2281, the New California Republic has refurbished rail lines and uses these to move cargo and people across its territories, including the Mojave Wasteland. Traffic has been halted due to the deathclaw infestation, but Chomps Lewis in Sloan will tell the Courier that what they dig from their quarry is shipped off by train to the New Vegas Strip and other parts of the Mojave Wasteland.[1]

However, should the infestation be eradicated, the bartender of Boulder City will mention the trains will become operational once more.[2] Locomotives are mentioned to still have functioned shortly after the Great War in the Capital Wasteland, utilized by the Settlers to leave the region from Union Station.[3]

Retrieved from "https://fallout.fandom.com/wiki/Locomotive?oldid=3518039"
Community content is available under CC-BY-SA unless otherwise noted.