Chance to pick a lock

Difficulty of locks the player is able to pick, chance for a successful "force lock" attempt

Difficulty of locks the player is able to pick, chance for a successful "force lock" attempt 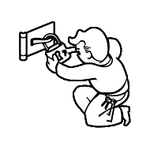 “The skill of opening locks without the proper key. The use of lockpicks or electronic lockpicks will greatly enhance this skill.”— In-game description

Example: A starting Perception of 5 and Luck of 5.

In Fallout 3, the Lockpick skill determines which locks one can attempt to pick. The skill must be at least the lock rating to try, and locks are rated at increments: Very Easy - 15%, Easy - 25%, Average - 50%, Hard - 75%, and Very Hard - 100%. With the prerequisite skill, picking a lock takes the form of a mini-game.

Investing in this skill also increases the probability of successfully forcing the lock open, which, combined with the Infiltrator perk, can be a convenience mechanism. The chance of forcing the lock can be found by taking their skill, subtracting the requirement for the lock, and adding 10%.

Example: A starting Perception of 5 and Luck of 5.

Lockpick in Fallout: New Vegas operates in much the same way as Fallout 3, with the Lockpick skill determining which locks the game will allow the lockpicker to attempt picking. Their skill must, again, be at least the lock rating to try, and locks are rated at 25% increments: Very Easy - 0%, Easy - 25%, Average - 50%, Hard - 75% and Very Hard - 100%. With the prerequisite skill, picking a lock takes the form of a mini game (see Lock for details).

“Question: "I've got myself a hand-cannon and yet I can't get through a rickety door cus it's "locked." Shouldn't different features have more interactivity with each other?"
Joshua Sawyer: "If you have a hammer and a screwdriver, but you can hammer in screws as well as nails, there's no reason to have the screwdriver.

Apply this to Guns and Lockpicking and I hope it's clear why we didn't allow players to just smash down/blow up/shoot apart every locked object they came across."
Josh Sawyer Formspring answers”
“Question: "The "realism must be across the board" counter argument is equally disingenuous, as all things you mentioned are unrealistic to make gameplay easier and flow better. And shooting out a lock wouldn't replace lockpick for the same reason it doesn't IRL,"
Joshua Sawyer: "No, it's not a "disingenuous" counter. If a person makes an argument for a feature because it's realistic, it begs the question of why they don't want other things to be realistic. If the person wants a feature because it makes the gameplay easier and flow better (subjective), he or she shouldn't use realism as an argument because it confuses the issue. And that's what I said: if someone wants to be able to blow locks off with weapons because you don't want to put points into Lockpick or play the lockpicking minigame, just say so. I still think it's a bad idea, but at least the people involved would be arguing on the same topic."
Josh Sawyer Formspring answers”
Retrieved from "https://fallout.fandom.com/wiki/Lockpick?oldid=3331097"
Community content is available under CC-BY-SA unless otherwise noted.