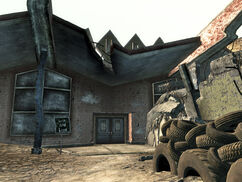 “You need guns, I got guns. You need armor? Got that too. So long as you got the caps for 'em.”— Pronto

Inside the Lock and Load, there is a workbench in the inner-left corner. The counter is littered with weapons. Behind the counter is the locker that holds Lock and Load's inventory, which requires a key to open, as well as two owned ammunition boxes sitting on the floor. Another owned ammunition box is on the desk next to the counter. To the left of the main counter, a cage containing a skeleton equipped with a party hat with a plate in front of it can be seen. The door which can be opened takes one to the basement where Pronto sleeps.

The shop has a very limited supply of anything and everything it does have is in very poor condition. Typically the store's owner, Pronto, only has around 150 to 400 caps on him at the very most. His repair skill is also very low. The only way to improve his inventory is to "invest" in Lock and Load by completing the Economics of Violence unmarked quest. This will not, however, improve Pronto's repair skills. After investing, the quality of the goods rises significantly.

Lock and Load appears only in Fallout 3.

Retrieved from "https://fallout.fandom.com/wiki/Lock_and_Load?oldid=3170717"
Community content is available under CC-BY-SA unless otherwise noted.