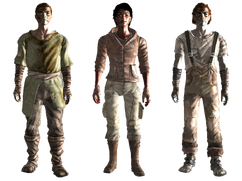 “People in Freeside generally fall into one of two categories. Those who've been here all their lives call themselves Locals.”— Rotface

Locals are residents of Freeside in 2281.

Locals are native to the settlement of Freeside. They walk around and do little else, outside of the usual activities in Freeside, such as drinking, prostitution, gambling and drug use.

In 2281, the locals are on hard times. Due to the NCR coming into Freeside, there have been conflicts between the locals and Squatters from the west, such as the Kings taking over Bill Ronte's newly-installed water pump and wars such as the Freeside NCR Squatters Incident.

These locals appear only in Fallout: New Vegas.

Retrieved from "https://fallout.fandom.com/wiki/Local?oldid=3128973"
Community content is available under CC-BY-SA unless otherwise noted.