A lobster is a mentioned only creature.

A lobster's life span typically exceeded 20 years, and the creature was known for unique traits such as blue blood.[1][2] Before the war, Dr. Casey Reed at the Nahant Oceanological Society reported accelerated growth in lobsters upwards of 12%, which could lead to colony collapse due to the increased food requirements.[3] A restaurant chain known as the Lobster Grill operated on the eastern side of the country, with an image of a lobster displayed on the company's logo.

After the war, the Enclave studied mutations effecting lobsters, or Nephropidae, noting information on a chalkboard.[4] Findings included extreme cases of hemihypertrophy, lymphedema, and other non-uniform gigantism, with 1:1 ratios of claw to body measurements noted.[4] In addition, lobsters exhibited both vestigial and non-vestigial polydactyly.[4] The Far Harbor Oceanarium sign mentions lobsters.

Barney Rook describes mirelurks as "big, butt ugly lobsters."[5] When gearing up to storm the Castle, one of the Minutemen will ask what they are waiting for, and encourages the group to head into the courtyard to "shoot those lobsters."[6] While escorting Billy Peabody to Quincy, he may express fear at the mutated creatures now present in the Commonwealth, recoiling from the "giant lobsters."[7]

Lobsters are mentioned in the Art of Fallout 4, stating that the developers wanted to include lobsters, given the location."[Non-canon 1] 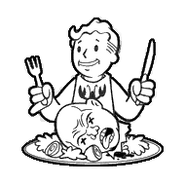 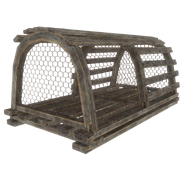 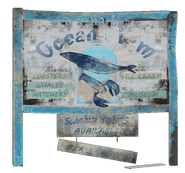