Lobotomites are surgically-altered humans found at Big MT in the year 2281.

Lobotomites are the result of medical experiments performed at Big MT. Most were residents or wanderers of the Mojave Wasteland unfortunate enough to have been collected by the Big MT drones before having all of their major organs replaced with electronic equivalents by the Sink's Auto-Doc routine. This routine was designed to keep all inhabitants of the Big MT inside and therefore secret, as only a brain inside a functioning human body can bypass the radar fence. The advanced Tesla coils that replaced the brains of the lobotomites were meant to allow individuals thus transformed to cognitively function with relative normalcy, operating their bodies remotely as the Courier does.

However, a problem with the Auto-Doc's programming meant that every captive processed instead had their brains lobotomized or completely destroyed, rendering them mindlessly aggressive shells of what they once were. Generations of the Big MT's captives were maimed this way before the Courier's bullet-scarred brain forced the Auto-Doc to correct its own programming.

Lobotomites are only capable of simple tasks such as using doors, walking, and fighting hand-to-hand or with firearms. They seem to have a proclivity for collecting random objects, as evidenced by their base, the Cuckoo's Nest. They are actively hostile, but function well enough to be able to fight alongside other lobotomites. Although they wear almost no armor, the modifications made to their bodies make them significantly tougher and more resistant to damage than the average human. Unable to talk normally, they mainly grunt but some can at times be heard saying "die," "stop you," and "never."

Dr. Dala calls them "skinvelopes." Her observations report that 43% of the time when two lobotomites are left together, they will either fight for dominance or "...inject bodily fluids into each others' orifices." The Think Tank makes use of lobotomites for their various experiments - they can be found inside many labs, and the Courier can splice them with dogs and robots in the X-8 research center - however, the Courier has very little to no control over the results of their splicing.

Typically, lobotomites wear a torn patient hood with a respirator, headphones, and a pair of high-tech goggles, with straps to attach them all. They can be found all across Big MT, mostly around buildings and areas marked on the map.

Lobotomites wear lobotomite jumpsuits or patient gowns which offer very little protection against damage. This apparel has a low Damage Threshold, but the medium to high health of the lobotomites somewhat counterbalances this.

Lobotomites are armed with either a firearm or melee weapon. They carry more powerful weapons at higher player levels, and can pose a credible threat even to very high level players, since at very high levels they often carry hunting revolvers or brush guns. At all levels, melee-oriented lobotomites frequently carry Saturnite fists or proton axes.

Usually, they attack in groups of three - with two melee-oriented members and one ranged. A single night stalker occasionally can be found in their group, and nearby Y-17 trauma override harnesses will fight alongside lobotomies if both spot the Courier.

Lobotomites appear in the Fallout: New Vegas add-on, Old World Blues. They also appeared on a loading screen of Fallout and they were to appear in Fallout 2 in a cut encounter.

“Original sketch for above - interesting story behind this image. Jason and I had already done a first draft of the story for FO2, and at one point the player was to be ambushed by lobotomized creatures (lobotomites), when a renegade brotherhood soldier comes to his rescue. Get it? It's Fallout Tales # 2 and it was an illustration of a scene from FO2. Of course, the story was changed after FO1 was released, but it seemed like a good idea at the time.”— Leonard Boyarsky on No Mutants Allowed

A lobotomite swinging a sledgehammer 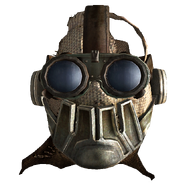