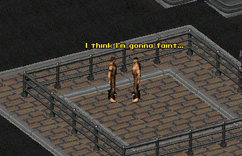 “We're too evenly balanced in our fight against each other. I need just one trained person to help me.”— Lo Pan

Lo Pan wants you to take out the Dragon - hand to hand, if possible is a quest in Fallout 2.

When you first arrive at the center of San Francisco, you'll see a ring in the middle of the streets crossroad, and two men fighting hand-to-hand there. After witnessing their fight, the Chosen One learns from onlookers that the two men are gym owners and Kung-Fu masters. Their names are The Dragon and Lo Pan.

Lo Pan will task the player character to take out his adversary, Dragon, because he doesn't have what it takes to. Preferably, one is to kill Dragon bare handed. Before this match can take place however, six of his apprentices have to be defeated in the ring to be allowed to fight Dragon. Alternatively, the Chosen One can approach Dragon who tasks him to kill Lo Pan. Upon killing Dragon, the Chosen One is rewarded with 8000 XP.

Retrieved from "https://fallout.fandom.com/wiki/Lo_Pan_wants_you_to_take_out_the_Dragon_-_hand_to_hand,_if_possible?oldid=3418830"
Community content is available under CC-BY-SA unless otherwise noted.