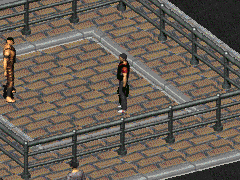 “You have helped me and did not even know it. With the Dragon dead I no longer have to follow those outdated moral traditions.”— Lo Pan to the Chosen One

Lo Pan is a hand-to-hand warrior in Chinatown in 2241.

Lo Pan is arrogant, domineering and ruthless.[1] He can be first seen in San Francisco fighting the Dragon in a ring. He wants to control the streets of Chinatown by taking out Dragon.

* Only when he has lost a lot of Hit Points.

His body cannot be looted after he dies.

Lo Pan appears only in Fallout 2 and is mentioned in the Fallout Bible.

Lo Pan is based on the fictional character David Lo Pan, the main antagonist in the 1986 cult martial arts film Big Trouble in Little China.

Retrieved from "https://fallout.fandom.com/wiki/Lo_Pan?oldid=3304224"
Community content is available under CC-BY-SA unless otherwise noted.