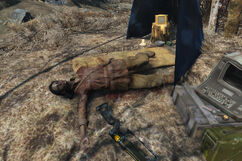 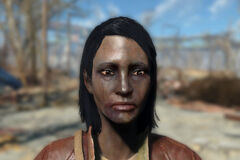 Liza is a deceased merchant in the Commonwealth in 2287.

Liza was part of a caravan traversing post-apocalyptic America in 2287. With the leadership of Jackson, the caravan specialized in mechanical repair and trade, using robots built from scavenged parts to protect themselves. Liza's corpse can be found at the caravan's campsite, just east of Wattz Consumer Electronics.

If Liza is spawned via console command, she has a male voice.

Liza appears only in the Fallout 4 add-on Automatron.

Retrieved from "https://fallout.fandom.com/wiki/Liza?oldid=3342644"
Community content is available under CC-BY-SA unless otherwise noted.