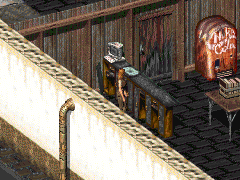 Blow up the mine's air purifier

“Ghouls are useful slaves. They ain't got enough minds of their own to be people, but they ain't worth killin', either.”

Liz is the proprietor of the general store in Broken Hills Downtown in 2241.

She is a trader, wearing a perpetual scowl.[1] She is also secretly a member of the anti-mutant conspiracy. She is stockpiling weapons to use against non-humans.

Liz runs the general store in Broken Hills, selling a bunch of items with a frown and a hefty price tag. By helping the human conspirators blow up the mine's air purifier, she will let the Chosen One into the back room of her shop, where a ladder leads to a hidden weapons cache. Another way to gain access to her basement without sneaking or combat is to buy drinks from Phil and pay him a total of $20 in tips, after which he will mention the weapons cache. Liz can be told about it, saying it came from "a reliable source," and by passing a Speech check she will permit use of the weapons against the mutants.

Liz appears only in Fallout 2.

If asked about the weapons cache in her store and getting a bad reaction (such as telling her the secret is "all over town", saying "You" when she asks about what to kill, or failing the Speech check), Liz makes the game glitch out because her script tries to initiate combat while still in dialogue.

Liz's hidden weapon store
Add a photo to this gallery

Retrieved from "https://fallout.fandom.com/wiki/Liz?oldid=3345072"
Community content is available under CC-BY-SA unless otherwise noted.