The living quarters is a location on board Mothership Zeta. The player must travel through this location as part of the quest This Galaxy Ain't Big Enough....

The aliens themselves apparently use it as a place to sleep in small stasis chambers dotted around the central area, and have fortified the position with two pairs of force field generators.

The living quarters are composed of three main rooms linked by hallways. The first room is a small atrium with side balconies blocked by force fields, so in order to go further the player must jump down from the balcony to the floor below. Alternatively, the player can destroy the force field generators with weapons, to faciliate a return the same way. In the atrium, the player must fight with one abomination and possibly several drones.

There are very few points of interest; most of the rooms contain only empty stasis chambers. Going further, the player will enter a hallway crossing. The left (east) cooridor leads to a room in which Toshiro Kago has apparently slaughtered a handful of aliens around a disabled teleporter if the player has found him his sword. The way will then be blocked by two aliens cowering behind a force field generator they are using to block Kago's way, it is a semi-spherical shield hence being open to the player's side for disabling or destruction. However, Kago does not engage in further combat even if new aliens are lured to his location.

To the right (west) is a hallway to the next room, which appears to be a diner with more aliens and two alien turrets that will attack the player. In the diner, alien food or loot from containers in the smaller room to the right can be found. Returning to the hallway, the player will enter the last room containing several abominations. From there the player can head straight to the ship's bridge, and the end of the final quest.

The living quarters only appear in the Fallout 3 add-on Mothership Zeta. 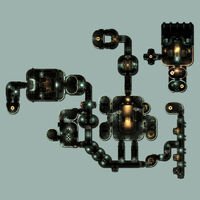 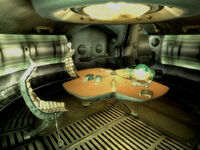 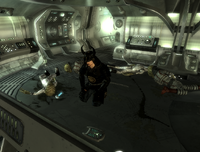